Many Voices, Many Visions

The Arthur Ross Gallery presents this exhibition of historical and contemporary images that reflect on issues of humanity, the environment, governance, justice, resilience, and social change. Forty-three works will be presented. Visitors should register in advance of their visit; 10 visitors will be allowed inside at all times.

Part of a three-part program, this panel, led by Kristen Neville Taylor, examines a re-imagining of energy solutions in urban settings and what experts see as energy fantasies. This event is hosted by the Penn Program in the Environmental Humanities.

This conversation focuses on how music is passed along through generations. Leading the talk is Guthrie Ramsey, a professor of music at Penn, in dialogue with Philadelphia singer/songwriter Bridget Ramsey and father-son rhythm section Mike and Mekhi Boone.

While many scientific achievements come from long years of careful planning, once in a while researchers stumble onto something completely unexpected. “At the beginning, we were looking to create a particular effect,” says graduate student Wei-Shao Wei. “Then, we observed something weird.”

Liquid crystals are composed of rod- or disc-like molecules called mesogens, and, as a result of the alignment of these mesogens, exhibit remarkable physical properties in between those of a solid and a liquid. The liquid crystals used in this study have similar characteristics to the ones used in LCD screens but are instead made of oligomers, flexible short-chain polymers comprised of smaller rod-like molecular building blocks.

Wei’s initial goal was to use this type of liquid crystal from Yang’s lab to create Janus droplets, which contain two different types of materials on opposite sides of the drop—in this case, one half would be a rubbery network called a liquid crystal elastomer, made by “locking” liquid crystal molecules in place with cross-linking, and the other half would be silicone.

Wei quickly discovered that the droplets were instead transforming into strange filamentous structures. At first the researchers thought that what they were seeing was an experimental error, but because the results were repeatable, they realized it was something remarkably new that they should try to understand.

“It was a visually spectacular effect. I wasn’t expecting it at all,” says Yodh. “We were trying to make designer drops, but in the process, we saw something interesting and different.”

Droplets containing chain-like liquid crystal molecules are spherical at high temperature. If the chains inside the droplets are of varying lengths, they transform into "pollen," "flowers," "coral," and "Medusa" when the temperature drops.

Both amazed and puzzled by their strange results, the researchers began a rigorous investigation to explain what they were seeing. With the help of the Yang lab, Wei studied droplets that contained different mixtures of liquid crystal oligomers made of mesogens of varying lengths. The researchers varied oligomer chain length, used different surfactants to hold the droplets together, and explored simple theoretical models to make sense of their findings.

A balance of forces

The essential feature of the model the researchers developed is that the structure of the droplet is driven by two forces: surface tension, the tendency of fluid surfaces to shrink into the smallest area possible, and elastic energy, with one example being the mechanical energy stored in bendable objects like bed springs or an archer’s bow. To keep surface energy to a minimum, the liquid crystal droplet normally forms a sphere, the shape with the smallest surface-to-volume ratio. Inside the droplet, however, the individual rods want to be both perpendicular to the sphere’s surface while also sitting parallel with other rods.

With these opposing forces at play, at high temperatures (~90 C/~194 F), the liquid crystal droplets are spherical and have a classic “radial hedgehog” internal structure, where all of the rods point towards the center, a configuration that requires elastic energy to form. Then, when the temperature decreases, surface tension and elastic energy change, and both the shape of the droplet and the alignment of the rods inside the droplet transform to minimize total energy cost.

By happenstance, the resulting droplet structures form a stunning array of complex shapes, from “flowers” that resemble microscopic chrysanthemums to massive “Medusa” networks of intertwining fibers. The effects are also reversible—droplets can go from spheres to tangled networks and then back again.

The importance of polydispersity 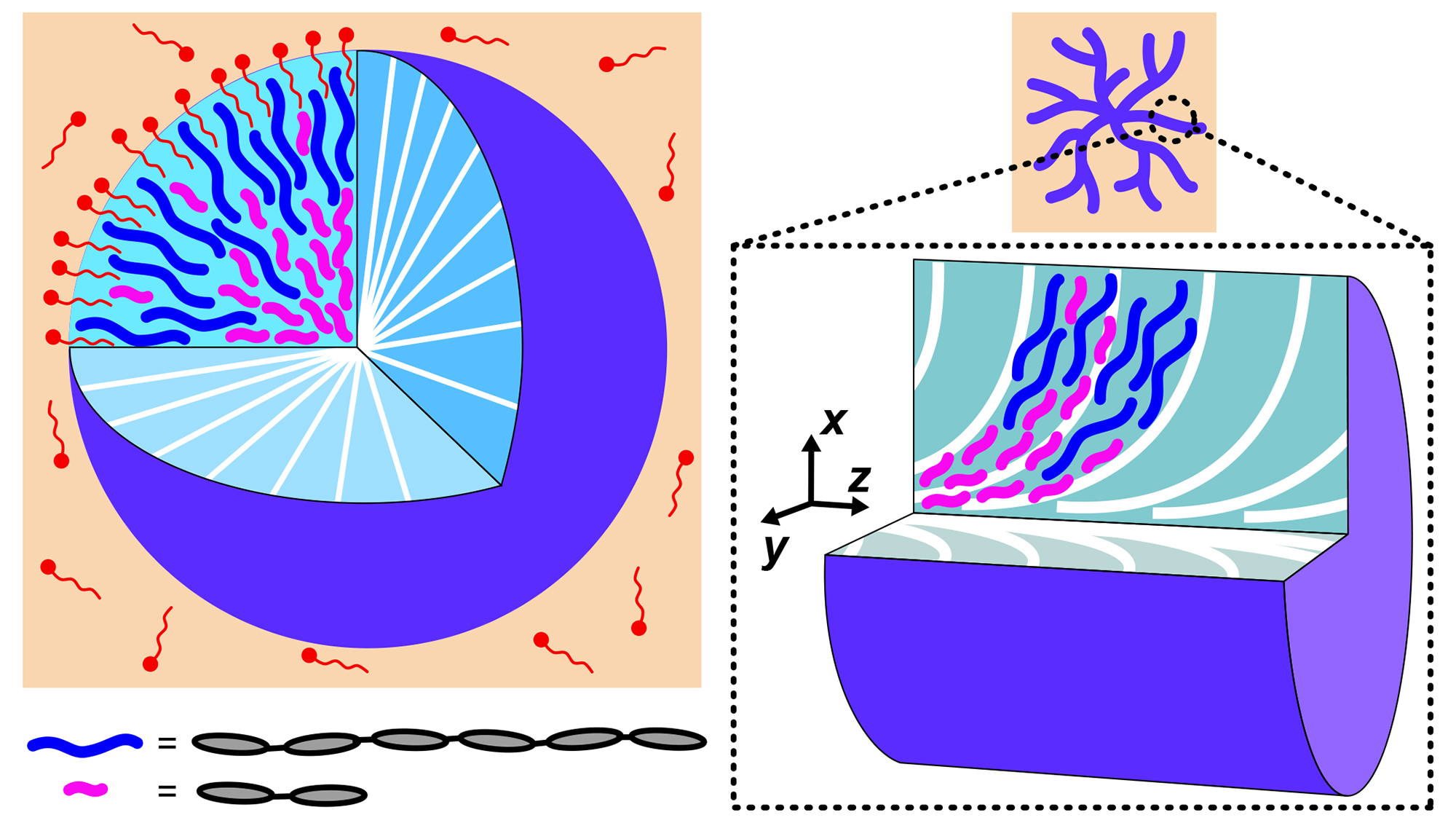 A quick explainer about what drives this strange shape formation

Droplets of liquid crystal molecules are in a water-based solution (light orange background) and are stabilized by detergent molecules (red ribbons).

Droplets exist as spheres at high temperatures (purple sphere on left) and form a radial hedgehog pattern where all of the rods point towards the center in a process that requires elastic energy.

When cooled, the structures turns into a filamentous network (cylinder on the right). Surface tension and elastic energy change, and both the shape of the droplet and the alignment of the rods inside the droplet transform to minimize total energy cost.

Rods made of smaller chains (pink ribbons) preferentially move to where the elastic energy is larger, near the center, while those made of larger chains (blue ribbons) moved to the surface.

In addition to the remarkable new droplet morphologies, one of the surprising findings of this work was that the key to this strange phenomenon was having both long-chain and short-chain rods in the drop—in scientific terms, having a liquid crystal system with polydispersity. When the rod-like mesogens were of similar length, no strange effects were seen, but if they had many different lengths, then the rods would move to different places inside the droplet based on their length. Rods made of smaller chains preferentially moved to where the elastic energy is larger, near the center of the droplet, while those made of larger chains moved to the surface.

“Usually when your sample contains a mixture of constituents of different size, or length, or even composition, then phase transitions or self-assembly events are smeared out or prevented altogether,” explains Yodh, “But here, polydispersity in the mixture helps to drive the effect, because chains of different length can move to different parts of the drop. This doesn’t happen for the homogenous, monodisperse system.”

While many questions still remain, like why, exactly, the droplets branch out in strange ways that make the material seem alive, the researchers hope to use these insights to explore new applications and concepts.

“One reason we decided to use these particular liquid crystal oligomers is that we can cross-link them and make them into an elastomer,” says Yodh, adding that these and other similar kinds of chain-like liquid crystal molecules could be used to create new types of soft materials, like actuatable fibers that could move and change shapes in response to temperature or moisture.

The researchers are also thinking about other phenomena where polydispersity plays a role in driving a material’s assembly and shaping its structure and function. Molecular heterogeneity in biology is potentially related to what the researchers found with the polydisperse chain-like liquid crystal molecules and might facilitate ways to synthesize and pattern materials based on what already exists in the living world—many polymers found in nature, like natural rubber, wood cellulose, and silk, are themselves polydisperse.

“In general, scientists tend to control things—you want to control so you can understand it, and thus we usually try to make and work with monodisperse systems,” says Yang. “But in biology, the source materials are sometimes a mixture of molecules with different chain lengths and functions: They can have different stiffness, hydrophobicity, or hydrophilicity, and that’s why it’s so complicated to understand.”

The researchers hope that this study, which was done in the collaborative “MRSEC spirit” by uniting efforts in materials science and engineering with physics, will encourage others to see new implications and possible benefits of polydispersity.

“This work was fun,” adds Yodh. “It was fun to be surprised in the beginning, and then frustratingly fun to try to understand it for so long. And it’s fun looking back. The disorder of the polymers makes something that’s different.”

Arjun Yodh is the James M. Skinner Professor of Science in the Department of Physics and Astronomy in the School of Arts and Sciences and Director of the Laboratory for Research on the Structure of Matter (LRSM) at the University of Pennsylvania.

The unbridled brilliance of Julian Abele

More thoughts on the state of American democracy

While transportation research is often focused on mobility and demand, researchers in Megan Ryerson’s lab are also evaluating its role in social dynamics and environmental justice.

Side gigs for good across Penn

For many, 2020 was a difficult year. Despite that, the community found ways to go above and beyond, in their own backyards and across the world.

The role of data in a world reshaped by COVID-19

Experts across Penn share their insights on how data and data science affect their fields in the context of an ongoing pandemic.